You can read part 1 of our family vacations here.

Let me say this right up front….I flubbed the mileage to Corpus Christi from Dallas…It is more like 432.43 miles (one way) VS the lower amount of miles I previously stated. Oopsie!

Back on the road, we left Austin and started the drive to Corpus Christi.

It’s around 3 1/2 to 4 hours from Austin to Corpus Christi, it was about 4 hours from Dallas to Austin. It’s a lot of time in the car with bad radio options. I really need some new CD’s….or satellite radio. It got scary for a while.

We past little towns and oil refineries, we past truck stops and rest stops. We stopped a few places along the way, to stretch or fill the gas tank. We did not stop anywhere worth talking about.

When we got to Corpus Christi, do you know the first place we went to (after we found the hotel and dropped off a few of our suitcases)?

it’s true, my son was so excited that we were going to be near the only 2 story Whataburger that we just had to visit it. An excited teen is a happy teen, so it was a MUST DO. Lucky for us it was very near our hotel.

I’ve never been to two-story fast food restaurant before, never been asked upstairs or downstairs when I ordered my food. I’ve never taken an elevator to my booth in a burger joint before. It was very interesting. It’s built a bit like a tee-pee, or a triangle. It was not nearly as roomy on the top-level (you know we had to sit on the 2nd story right?!?!?!)

This picture was taken from out hotel room, it show how close we were to the 2 story Whataburger

Here are a few more views from our hotel room. 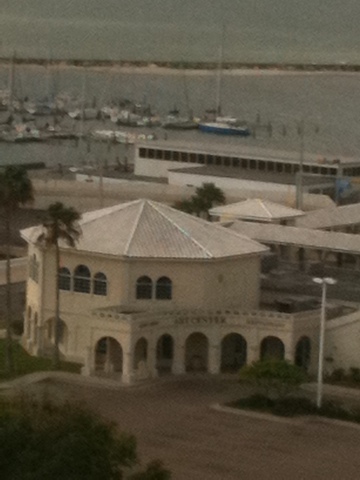 We ate our food, which was on par for fast food…meaning it was okay and salty and a tad greasy.

The wind was really strong, I’m not sure how to explain how strong the wind was, but if I owned a tiny dog I would have been worried that it might fly.

We drove along Ocean Drive, we looked at all the beautiful mansions that were right by the water, we picked the ones we liked best, we drove until the road ended at the Coast Guard’s gated headquarters. (It was Sunday, so the gates were closed).

We went to a few touristy shops. My daughter and husband are really good sports, they took pictures in silly hats. 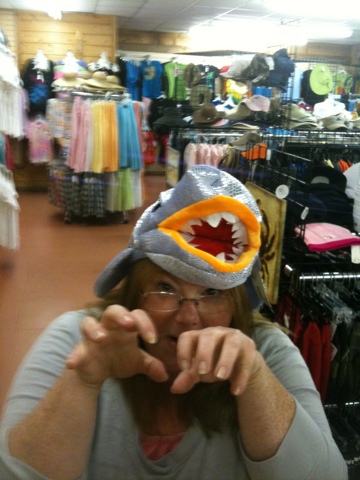 That would be me in a shark hat, trying to look fierce. Rawr!

We also went on a battleship, took 2 different ferries, fed sea gulls and  went to the beach a few times.  I’ll go into that later……

I will end this post with a picture of my sweet daughter in our hotel room.