I was intending to make lasagna tonight.

I changed my mind.  Since I  had already started a chicken soup.

I love chicken soup, you can add almost anything to it.

Pretty much anything (veggie wise) works in chicken soup.

I started my chicken soup yesterday. I like the two-day method, because I don’t have to shred hot chicken, and I believe that the flavors intensify when the soup has time to sit.

What I added to the pot

4 cups of chicken broth and enough water to cover the chicken and veggies,

Today I removed the skin from the chicken, pulled the chicken apart and placed it back into the soup.  I then added 1 large can of corn (and the liquid from the can) . Then I warm the soup, bring the soup up to a boil and reduce heat to a simmer.  Simmer for 20- 30 min.

I added dumplings during the last 10 min of cooking.  (my dumplings were diced Pillsbury grands biscuits)  The soup is flavorful, hearty and filling.  I also have 5 single servings of soup left.  I placed them in separate containers so that if someone in my home wants soup they can microwave a single serving and eat a quick meal.

I know today is Cinco De Mayo, but soup is what we had. 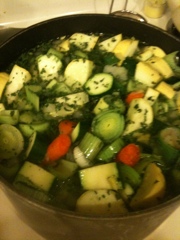 before it started cooking yesterday.

Notice the difference in the cooking pot from the first picture to the second one? I changed the pot yesterday right after I took the picture.  I decided the soup needed a bigger pot. 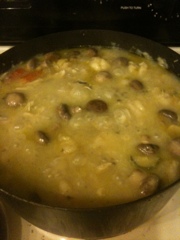 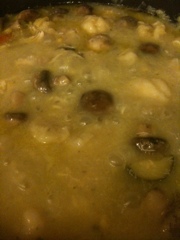